Time Out spoke to the Cumberphone Campaign a few days ago, and a nice little piece appeared in today’s magazine, entitled “Are Mobile Phones Ruining Our Theatres?”

But it was only a small article, so here’s the full transcript of our brief conversation, for those interested in finding out more… 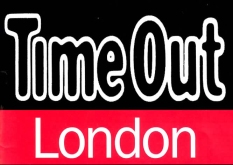 Cumberphone: We initially formed as a small group of actors (mostly from musical theatre and mostly in our thirties), who met at a social event over the summer and got talking about the issue of mobile phones at weddings – having them on silent whilst still using them as cameras. Also around our table was a writer who was working on a play about the discovery of radio waves and the birth of wireless communication, and an actor who routinely carried a mobile on stage with him, to jokingly answer if one went off in the audience. And so the notion of setting up a campaign-of-sorts was born.

Cumberphone: We were already pretty set on trying to do something fun within the industry – encouraging more pre-show short films from casts, with lyrics to songs changed to be about mobile phones, or whole skits like the brilliant one the Avenue Q team in the U.S. have subsequently released. So when the media reaction to Benedict’s little stage door soliloquy was so huge, we felt compelled to launch a more fulsome public campaign – it felt like a touchpaper had been lit and the moment was right.

When the Society of London Theatres released a statement saying they hadn’t heard of any initiatives beyond pre-show announcements, and when the Barbican’s reaction was to attempt to go into prison-camp-style lock-down (something that might well work for this one show, but was unlikely to have any lasting industry-wide impact), we felt that a broader discussion was needed – but we don’t seek to lead that discussion, just to better help facilitate it and focus it on practical solutions. We welcome input from all quarters, and want to bring together a broad spectrum, from shushers to shruggers, from texters to tutters.

Cumberphone: Theatres seem somewhat stuck in the era of first generation mobiles and pagers that might accidentally go off, and seeking to avoid it with polite reminders, as opposed to the entirely different new reality of Smart Phones, which are interwoven into the fabric of our identity and personhood and are almost never turned off in daily life. Even diligent theatergoers often struggle with just how resilient their phones can be to pacification – for instance, many people incorrectly assume silent or Airplane mode are sufficient. If people are taking photos or filming, it may be seen as disruptive or disrespectful to some in the Theatre, but it’s also entirely normal in almost every other aspect of daily life, and it usually means you’re enjoying a moment rather than trying to breach copyright. We can’t properly address the issue until we better understand it.

Much of the disruption isn’t necessarily a phone making noise, or people taking photos, but rather the constant checking – a lit-up ‘ghost-face’ is distracting up on stage as well as to fellow audience members. It’s not a case for making theatre more compelling – people these days could be watching humanity set foot on Mars, whilst still thinking nothing of multi-tasking to tweet about it, or check up on the babysitter. So this is more about Theatre playing catch-up. And no, we’re not advocating for “tweet seats”, but we do want to see more digital content, better WiFi, more e-ticketing and the like. We love our phones – and if theatres want us to turn them off they’ve got do a better job than just a brief announcement moments before curtain-up.

Signal-jamming and frisking and compulsory lockers and the like is out, not least because theatres actually want us to use our mobiles more – whether that be ordering interval drinks, or downloading digital programmes, or tweeting about the show. For us this isn’t about being more draconian, it’s about being more innovative. 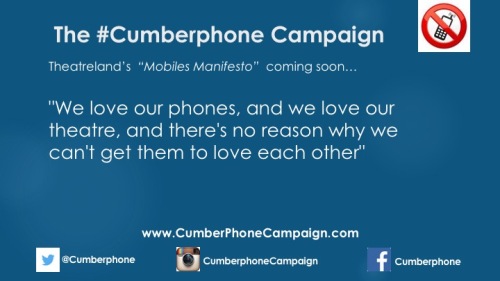 Cumberphone: There are some simple psychological nudges that can be deployed, such as having no-phone logos on the front of tickets instead of small print on the back, and relatively cheap modifications such as providing seat-back pockets for people to put their phones in and hooks for jackets and handbags, and exit signs could incorporate clocks. Theatre should seek out advice from other ‘nudge’ campaigns such as the anti-smoking Stoptober – there’s far more we could be doing.

Then there’s the technological infrastructure aspect – directly communicating with the audience via their mobiles. Booking systems should require or incentivize us to provide mobile phone details, just as we do with emails (and as is commonplace for train tickets). As well as sending a brief reminder text-message containing seat locations, venue address and show running time, it could also include a link to a funny short video filmed by the cast asking you to turn off your phone – which is likely to have more impact than a faceless PA announcer alone. Existing confirmation emails are fine up to a point (if somewhat varied across the industry), but they contain a plethora of information – we need just the basics, and for “no-phones” to be included in that, not just buried in small print as an after-thought.

We want to see the industry do more to share best practice, and we should find a point-person to co-ordinate this. A wider publicity campaign (with plenty of scope for commercial sponsorship of short films and adverts) fronted by theatre’s leading lights could help better sell theatre as the special one-off live event that it is, an almost unique place where you can uncouple from your phone for a few of blissful hours – rather than being frowned upon for “not knowing the rules”.

Secret Cinema currently do this very well with their no-phones policy and #TellNoOne tagline, and the star-studded “Don’t Text or Talk” pre-screening short films at the Alamo Drafthouse cinemas in the U.S. go way beyond our old Orange “Don’t Let a Phone Ruin Your Movie” ads.

We can do more – and it can be fun, something that far from excluding or berating audiences can actually help better get them in the mood for the show ahead. Having cast members perform a skit, or make a direct appeal, is bound to have more of an impact than a FOH manager or PA announcement – as is involving audiences in verifiably turning off their phones together as part of a collective ritual, rather than just hoping everyone has already and all that’s required is a brief reminder.

And given that even if you turn your phone off it can turn back on with the gentlest of accidental flicks, we also want Theatre to lobby the mobile phone industry to incorporate a stealth-mode function that’s as simple to turn on as Airplane mode with just a single swipe.

Effectively a way to ensure your multi-faceted super-smart phone remains truly silent, motionless, dark and non-invasive (even if it turns itself back on) but can still function if you need it to – such as using it as a camera at a wedding. Part of the problem theatres face is that phones (which the smarter they get can take so long to turn off and back on again) are so integral to who we are, that turning them off entirely can feel like losing one of your senses – most people just don’t do it in any other area of their daily lives, not even when we’re asleep. We can even use our phones on airplanes and underground trains now.

Cumberphone: Our campaign is focused entirely on the single issue of mobile phones, and we seek to work to find creative and innovative solutions. We totally appreciate where the Theatre Charter is coming from, yet we equally understand why many people find the very notion of ‘etiquette’ off-putting and exclusionary. Audiences in the West End are mostly going to be different from those in a community or pub theatre – there’s no panacea, no one-size-fits-all approach. Having fun videos like that produced by Avenue Q is very much the route we’ve decided to take. We also have “The Cumbies” awards for best practice – whether that be a creative company tweet, a funny show-stopping technique from a cast member, or Cumberboo awards for bad behaviour – and we’ve named many of them after people who’ve famously spoken out, such as Richard Griffiths, Patti LuPone and Hugh Jackman.

It’s all just part of helping to get people talking.

Securing theatre funding, discovering fresh talent, bringing in new audiences, increasing diversity and opportunity across the industry – all of these are of course greater priorities. But mobile phones are increasingly becoming a bit of an issue too, so we’re just here to help play our small part – hopefully the ideas presented in our “mobiles manifesto” will lead to some lasting solutions.