What a way to kick off “Off-tober”! 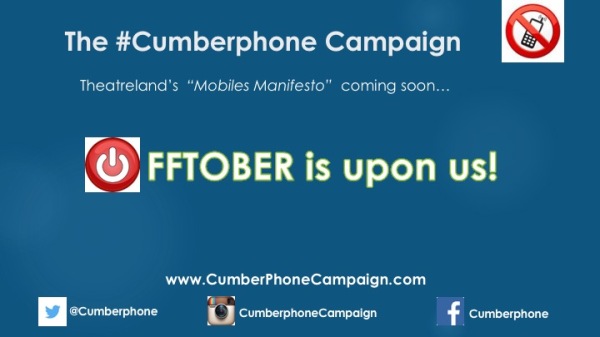 This is brilliant stuff from AvenueQ – hopefully it will spark loads more!

“Tackling the issue of Mobile Phones at Theatres, one show-tune and soliloquy at a time…”

We’d like all of you wonderful theatricals reading this to perform a line, portion, scene or song from your show (or a rival show perhaps) – with words suitably adjusted for the phone-addicted audience – post it online – on Twitter or Instagram or Facebook or Vimeo using #cumberphone – then nominate your fellow professionals to do the same. It’ll be hard to beat that Avenue Q video – but give it your best shot!

It’s like the ice-bucket challenge, crossed with #15secondshakespeare – but less cold!

They can be rough and ready, in costume or not, they can be mere Vines or Snapchat rants, or they can be a Kenneth Branagh Disney extravaganza. Just a few fun ones to get the ball rolling for now (there’s no limit on the number of entries per performer or show, so keep ’em coming!), to help get people talking…

Indeed we do. And so here it is. 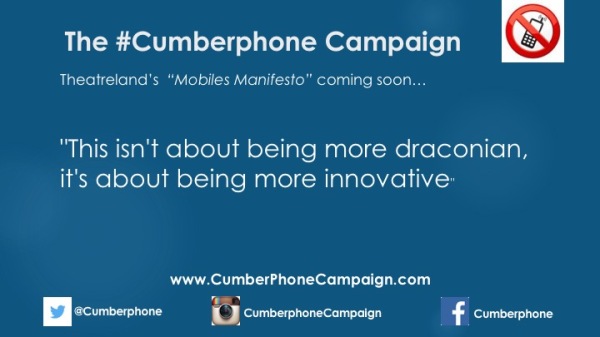 Playbill – article by Mark Shenton on the Cumberphone Campaign

Our Theatreland Mobiles Manifesto will be launching in October – this is just our opening salvo in the campaign – so hopefully we’ll have lots of your comic/tragic #cumberphone videos in before then to help kick things off with a smile.

The #Cumberphone Campaign Awards – “The Cumbies” will be annual, but (given just how prevalent those mobile phone intrusions are) there will plenty of chances to earn an Honourable Monthly Mention in some categories.

(in the U.S.A., we have the #LuPonePhone Campaign Awards – “The Ponies”) 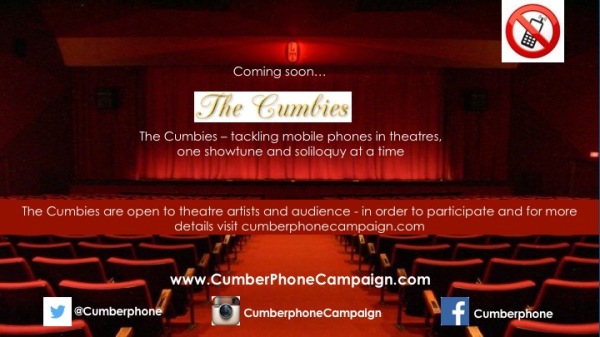 Brief Announcements and Signs don’t seem to be doing the trick so far, do they?

The idea of having short, humorous, educational and irreverent films and performances before all shows is a key plank of the Cumberphone Campaign – so if you’re in a show or part of a company and want to make a short video… please get uploading now!

We hope that Theatreland will institute far more ritualised and collective acts of encouragement to audiences to “turn their phones off” (although it’s not that simple – see Stealth Phone and the Mobiles Manifesto) – and a great deal of that is going to be in the hands of our talented, tireless actors. It should be fun, not onerous, for both audience and performer.

If all those wonderful performers are willing to strip naked for the good cause that is West End Bares, then surely we can pull this off too. 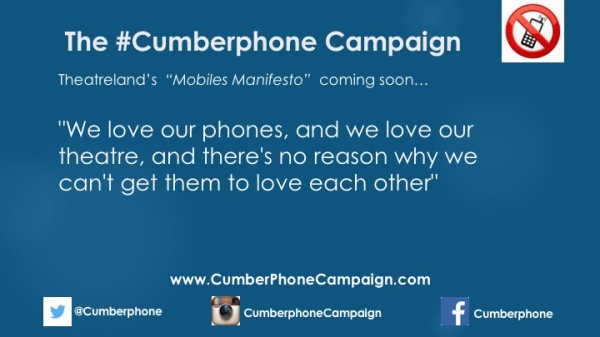 You can also get your “Twibbons” (a mini cumberphone logo to add to the corner of your Twitter profile to help spread the word) here – http://tinyurl.com/cumbertwibbon 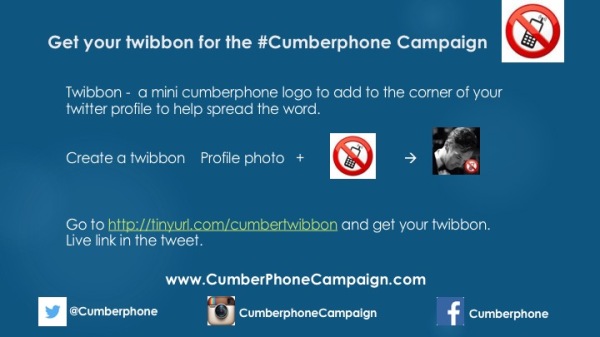 Here’s just a few of the very many examples of recent exasperation from Theatreland’s brightest and best on the subject of Mobile Phones at the Theatre:

Eva Noblezada, Kim, Miss Saigon: “I’m sorry, but to sit idly in your seat looking at your BRIGHT screen for minutes is just…really?”  (@EvaNoblezada) – 29th August 2015

Carrie Hope Fletcher, Eponine, Les Miserables: “To the absolute AR*E in the upper circle with your red recording light on… YOU, yes YOU, single-handedly, were putting me off… it’s hugely disrespectful to those on stage and those around you…When it’s a concert it’s sort of the norm… Theatres are a very different atmosphere. You’re told in an announcement right before the curtain goes up and there are signs in the theatre.” (@CarrieHFletcher) –  25th August 2015

John Boydon & Sandy Moffat, Jersey Boys: “Never known an audience like this! A girl on her phone all of Act 1” (@Sandy_Moffat) – “I don’t think I’ve ever seen as many phones lit up in an auditorium as tonight… Despite the FOH staff trying their best to stop it. Ridiculous, rude and disheartening.” (@JonBoydon) – 4th September 2015

We hope you’ll consider get on board with the campaign too!